The ORCV offers a core sailing program of approximately 15 races including Bay, Coastal and Offshore events. The races are grouped to form 3 championship series and augmented by a number of specialist training and development events.

The ORCV program offers a different style of racing to our kindred clubs with co-operation and scheduling to minimise calendar clashes as best we can.

The Coastal and Offshore races start at Drapers Reef, just inside Port Philip Heads approximately 1 hour before slack water. We endeavour to start the coastal races as close as possible to dawn and yachts to be home that evening. The offshore races are scheduled around public holidays and typically start at night.

The core races fall into four groups based on Australian Sailing safety categories:-

Double Handed and shorthanded entries, racing with autohelms (subject to a maximum of 4 crew), are offered in all races. All competitors compete, and are scored in an “Unrestricted Monohull Division” providing an overall result for the total fleet. Yachts racing with only two crew have the option of entering an additional Double Handed Division. 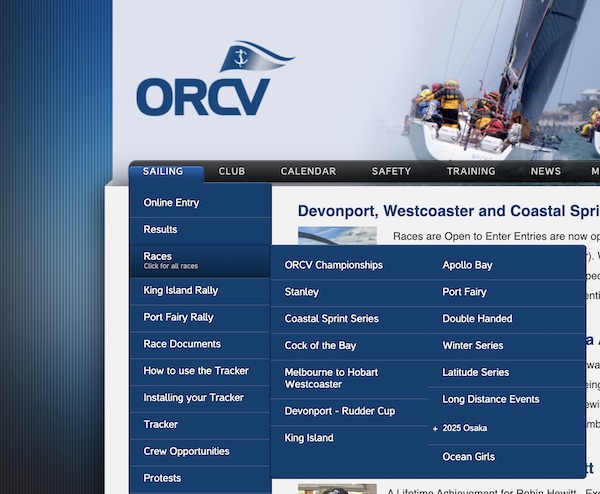