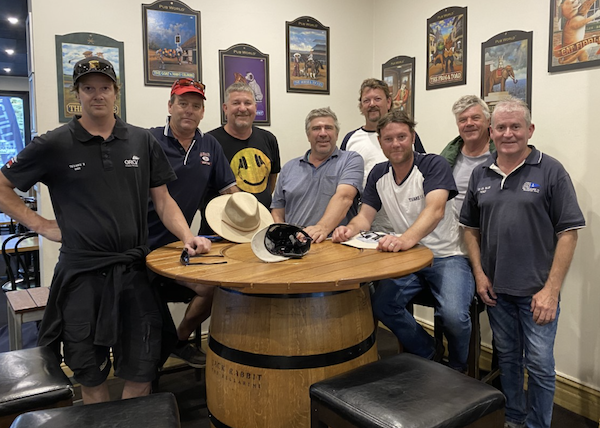 Tevake II crew at Queenscliff and ready to race tomorrow.

It’s great to see TEVAKE II back in an ocean race, sailed by TEVAKE II family in honour of owner/skipper Angus Fletcher.   The crew of Tevake II are seasoned sailors although this race to Port Fairy has mixed feelings for them all, the first race since the passing of Angus.

“We had planned the HBYC Sea Pilots race to be the celebratory race for Angus but that was cancelled with the recent Covid – 19 lockdown. Both Angus and Holly treated us as family and it wasn’t easy getting on board as crew with Tevake II,” said Paul Neilson, skipper of Tevake II for the 2021 Port Fairy Race.

“You needed some experience but if you showed a willingness to learn and have a go, you’d be given a start”.

Paul went onto to say “we just love the Port Fairy race” recounting when in many races to Port Fairy on Tevake I, they would battle against Barcardi, often finishing within seconds of each other. “If one was leading down the coast from the start, the other would take over as we rounded Cape Otway with a reach or run to the finish.” “For this race, we’re hoping the breeze builds a little earlier as the predicted light conditions at the start will favour Carrera S and Maverick”. “Whilst it may not be the race ideal of Tevake II, that won’t stop the Tevake II crew putting in their best efforts.”

“On the travel to Queenscliff, we’ve chattered about how different it feels without Angus onboard,” said Craig Jackson as regular both on Tevake 1 and II. “Normally Angus would be down here, checking and planning the navigation, so I do feel a little strange that it’s me this time” explained Andrew Hesselmans.

If you look at the crew, we’re all pretty close and sailed many a campaign either Tevake I or Tevake II. The skipper Paul Neilson is an experienced ocean campaigner and stalwart on both boats. “It was pretty special to sail in 1999 with my Dad and take out the Rudder Cup on Deja Blue and then 20 years later to win it again with Angus on Tevake II”.

Watch captain, Andrew Hesselmans first sailed as they were short-handed at Airlie in 2014 and went onto completing the Sydney to Southport, Magnetic Island, Airlie Beach, two Melbourne to Hobarts, two King Islands and was part of the winning team on the Melbourne to Devonport in 2019. Andrew commented, “it’s pretty special that Angus had trust in us to deliver the boat for many races without him.”

The second watch captain Tim Ford possibly more well known on ‘Spirit of Downunder’ a regular with ORCV and Melbourne to Osaka, and has also joined the Tevake II crew for many Queensland races and a Melbourne to Vanuatu.

On the foredeck, you will find Rod Langham over the years as Tevake II sailed down the West Coast to Hobart and is found hanging out there on the bow in most Tevake II races.

Doug White, Garry Cook and Craig Jackson have all competed many races on Tevake II and with a smile and grin, they go onto to say “it’s great to have Tony Green join us for his first ocean race.”

Paul goes onto to say “Port Fairy when you arrive into the Moyne River, it’s out of a movie, so picturesque and the hospitality of the Port Fairy Yacht Club is so welcoming and worth the trip.”

In all, a pretty experienced crew, all looking forward to working Tevake II hard, to achieve the best result possible for Angus, and his wife Holly.

You can follow the Tevake II crew and the other boats competing in this year's Port Fairy race here https://race.bluewatertracks.com/2021-orcv-melbourne-to-port-fairy-race

The late Angus Fletcher skippered TEVAKE and TEVAKE II over many years and was a fierce competitor with the ORCV, and past Commodore. You can read more about Angus Fletcher here

Light Conditions make for a very challenging race Carrera S (AUS49005) a Marten 49, skippered by Gerry Cantwell takes 1st on AMS and PHS plus line honours in the 2021 ORCV Port Fairy race in what Gerry sums it up “as a very challenging race. It wasn’t a physical race and I must say and I don’t think I’ve ever had a race where the deck stay dried and was so comfortable. For the first few hours after the start, we found ourselves in a pack with Tevake II and Alien and it was frustrating trying to get away and find what breeze there was in the very light conditions.” As the boats come to...

Tevake II crew honour Angus and Holly in the 2021 Port Fairy Yacht Race Tevake II crew at Queenscliff and ready to race tomorrow. It’s great to see TEVAKE II back in an ocean race, sailed by TEVAKE II family in honour of owner/skipper Angus Fletcher.   The crew of Tevake II are seasoned sailors although this race to Port Fairy has mixed feelings for them all, the first race since the passing of Angus. “We had planned the HBYC Sea Pilots race to be the celebratory race for Angus but that was cancelled with the recent Covid – 19 lockdown. Both Angus and Holly...

2021 Port Fairy Weather Prediction Our 7 competitors look to be in for a lovely weekend weather forecast as they head to Port Fairy and that weekend away. It's light winds at the start and a northerly building late Friday and then as they go around Cape Otway, they should enjoy one tack to the finish.  The expectation is that Tevake II and Carerra S will lead the fleet and tussle for line honours but it could be anyone's race based on handicap. We wish the fleet of Carrera S, Blue Water Tracks, Maverick, Foggy Dew, Foxy Lady and Alien wish them well. You can follow the fleet on...

Port Fairy Race & Rally plus West Offshore Product Coastal Sprint 3 Open for Entries With International and Interstate travel very tricky at the moment, we've heard you in that you just wish to get away and just sail more.   The ORCV has released two more sailing options for your enjoyment and invite you to join us. Port Fairy - Race or Rally Join the race to Port Fairy or come try ocean sailing and be part of the rally.  For those that race, it's a 135nm, Category 2 race which starts on April 2nd (Good Friday) at 5.30am.   It's often a race of two parts,...

Melbourne to Port Fairy (M2PF) Off with the Fairies...   The following piece was written John Curnow for The Port Fairy race. At the time, a lot of people commented on how they loved it. Tremendous. If your shore crew are coming this time, then perhaps they might like to read to it. So the dates may all be long gone, but the sentiments are as true as ever.... This is definitely worth going to sea for! We all like to escape! Being off with the fairies might just be the cure for fiscal meltdowns, searing Summer heat and no bushfire has ever taken to The Paddock known as Bass...