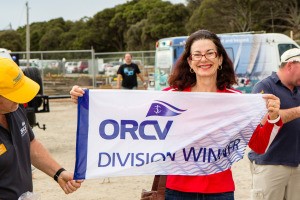 The Ocean Racing Club of Victoria’s annual Winter Series launched with a bang and shower of flares on Sunday 2 July 2017 and is shaping up for a bumper finish with the annual Geelong Race weekend on 9-10 September.

This year the ORCV and the Melbourne Osaka committee are inviting competitors entered in the forthcoming eighth edition of the Melbourne Osaka Double Handed Yacht Race (M20) 2018, to be hosted onboard the local boats for a fun weekend, to meet other competitors, mentors, former Osaka competitors and establish Melbourne sailing connections and support prior to the departure of this iconic race from Melbourne in March 2018.

With a full card of thirty two boats now confirmed as of 30 June cut-off, the Osaka fleet numbers three international entrants, including two boats from Japan and representation from six Australian states, with five from Queensland, four from NSW, three each from Tasmania and Western Australia, one from South Australia and fourteen from Victoria. Amongst the 64 crew, there are eight female sailors.

This Corinthian challenge also attracts a wide range of ocean racing yachts. A staggered start with smaller and slower boats starting earlier and larger faster boats later, makes for fascinating tracking of the ‘hot pursuit’ across the Equator and a nail biting finish as the compacted fleet pick their way through an armada of trading vessels up Osaka Bay. To find out who is going on this journey of a lifetime, check out the competition on the Melbourne Osaka Cup 2018 website.

So the end of the Winter Series Geelong weekend will provide an excellent opportunity to brush up on ship spotting and dodging, whether you are doing the local race or the trans equatorial M2O next year. Bring your crews along for a pre season ‘shakedown’ in readiness for the 2017-18 sailing season or host a team from our Osaka entrants to give them a taste of racing on Port Phillip.

The Passage Race from Melbourne to Geelong (M2G) on Saturday 9 September is the final race of the ORCV Winter Series as well as standing alone as a great race in its own right, for both mono and multihulls. This race also contributes to the point score for the ORCV Inshore Double Handed Champion Series and Overall Double Handed Champion award.

Host club Royal Geelong Yacht Club (RGYC) provide a great destination and facilities for an overnight stay, with bar, band and food available Saturday night and buffet breakfast on Sunday morning. A veritable hot spot for tall tales and true with the chance of picking a few ‘pearls’ from the ocean veterans.

Sunday 10 September sees the women step up to take charge for the fifth Women Skippers & Navigators Race (WSNR), the return Geelong to Melbourne (G2M) passage. Our local female keelboat sailors will have the opportunity to meet and compete with and alongside the Osaka girls – a great inspiration for our local Women & Girls in Sailing (WGIS) and the ORCV Ocean Girls. The WSNR has become a very popular and competitive event amongst our local female sailors, with WSNR divisions awarding trophies in IRC, AMS, EHC and double handed for those with greater than five boats. New helms to the race are encouraged by the provision of a Novice Skippers trophy which must be indicated on the entry form. For those navigator’s wishing to submit a Log, a Navigator’s Prize will be awarded for the best log.

To make the season curtain raiser a success, we need your help to make the Geelong weekend event a ‘double winner’.

Please contact the ORCV office This email address is being protected from spambots. You need JavaScript enabled to view it. if you can assist us with any of the following requests -

We look forward to hearing from you.

Good luck and fair winds for the event!