Melbourne to Hobart fleet close in on the finish

Legends of the Melbourne to Hobart “Westcoaster” race talk about it being a race in four parts.  What they don’t talk about, as often, is the sometimes ‘Run Run Stop’ nature, of the race.  It is, in part, what makes the race so challenging.

This year the fleet got away well; then had some fluky overnight winds near King Island.  Followed by a good run to above Strahan before hitting another weather hole.  Last night the wind filled in nicely driving the fleet to the South West Cape.

It is here that experienced “Westcoaster’s” know they are going to get ‘proper wind’’.  With waves of 2-3 metres and long swells, generated in the deep south, 20-30 knot north westerlies have kicked in for this year’s fleet.  The scenery around South West Cape and Maatsuyker Island is spectacular but Lord Jiminy a Class 40 skippered by Guillaume Leroux were passing it in the dark as they rounded at five this morning.

The next 40 nautical miles as you head east from Maatsuyker to the South East Cape is often described as, exhilarating, champagne sailing or just terrifying.  It is here the helmsman can ply their trade, surfing under spinnaker or avoiding rogue waves as they are buffeted from any direction.

Lord Jiminy having started the run with a 25 nautical mile lead over the yachts Tevake ll, Audere, and Faster Forward have seen that lead cut to around eight nautical miles.  The mid fleet has also bunched up as they chart a course to the east of Bruny Island.  The D’Entrecasteaux channel beckons but Bruny Island is set as a mark of the course and the fleet must traverse Storm Bay before entering the mouth of The Derwent River.

This fourth part of the race, some say, is the hardest part of all.  Crews are tired, particularly the double handed crews of Alex-Team Macadie and Blue Water tracks.  All are ready for hot food and hotter showers, but here is where you can stop again.  Storm Bay and the Derwent are nothing if not fickle.  The Derwent is known by locals to ‘close down’ at night and that is what is predicted for later tonight.

Currently, the Bureau of Meteorology MetEye would suggest that timing is going to be everything.  Yachts that are in Storm Bay and the Derwent precinct mid to late afternoon could enjoy 10-15 knots from the South, ideal.  Later arrivals will have to contend with little or no breeze during the evening and well into Friday.

The all-important handicap positions will be firmly in the minds of the crews of Vagabond, Alien and Foggy Dew.  They will be fighting to get up the Derwent as efficiently as possible. 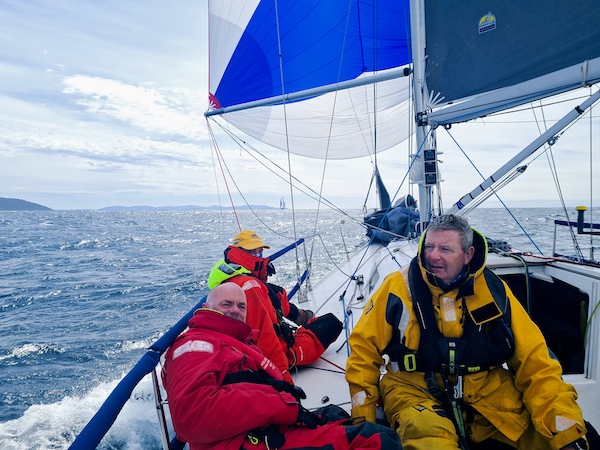 Race Director Jeremy Walton commented this morning, “they are having so much fun at the moment.  The Run along the bottom of Tasmania, just into the Southern Ocean is something all ocean going yachties should aspire to.  There really is nothing like it.”  He then laughed just a little as he continued, “Storm Bay and the Derwent though, well that can be no fun at all.”

The first yacht can be expected to cross the finish line late this evening and it will be a long night for the ORCV ground crew in Hobart.

You can track the fleet here:  https://race.bluewatertracks.com/2021-melbourne-to-hobart-westcoaster