Tony Bull from Bull Sails in Geelong offers some advice on the symmetric kite. Tony has vast experience and sails aboard the DK46 eXtasea and the Colt, Cinquante, both of which use the symmetric Bag and the accordant spin pole, which also needs trimming, effectively as much as the Bag itself! 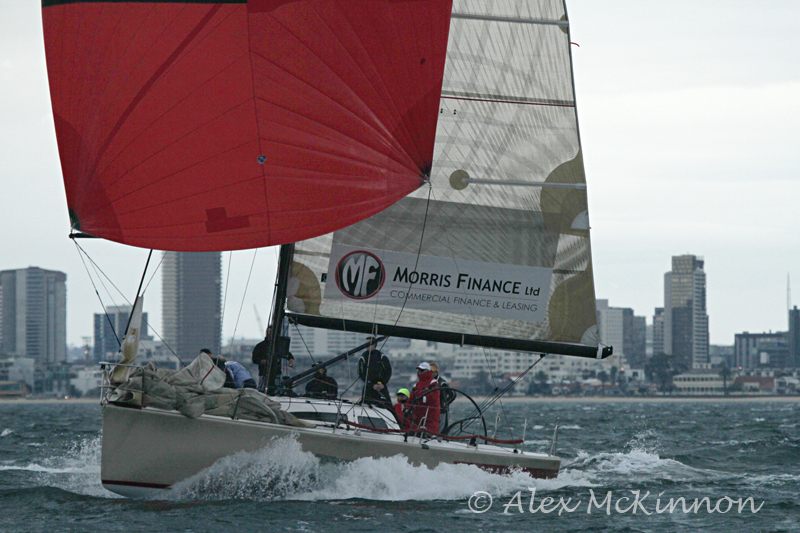 Cinquante under kite in Race One of the Winter Series. Pic courtesy of and © to Alex McKinnon.

The fine-tune controls used to fly a symmetrical spinnaker off a pole.

When a complete novice first steps on board a racing yacht, invariably the first response is amazement at the number of sheets and lines that run along the deck and up the mast. They find it hard to comprehend that all these ropes have a role in the sailing of the boat. All top sailors will tell you the difference in the relative speeds of similar craft is the ability to constantly adjust the setup of the boat to counter the wind and wave variations as they are faced. This ability to change gears and keep your boat sailing well through the oscillating conditions is what sets the top boats apart.

All these various lines and sheets each have a role to play in these alterations. I see so many boats sail around the course with a very token approach to changing gears. I had a recent experience of doing some two-boat sailing with a couple of sister-ships who race against each other at club level and compete in the odd title for that class. One skipper made the comment before we even hit the water that the other boat always ran faster downwind despite using the same make spinnakers. Looking at the two boats sitting side by side on the hard stand, I pointed out that his boat had a substantial amount more rake in his mast and, looking closer, his spinnaker pole ring on the front of his mast was about half a metre higher than his rival’s. Both of these factors would have a significant bearing on the comparable speeds of the two boats. To be able to change gears, we need to have awareness of what can and should be adjusted to constantly maximise our speed. 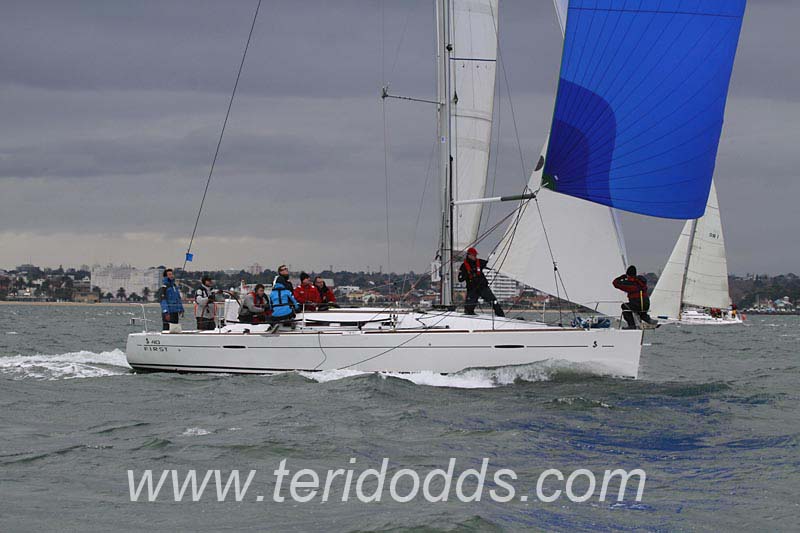 Halcyon looking good - Pic courtesy of and © to Teri Dodds.

I see boats with their spinnakers flying, the person on the sheet trimming intently while the spinnaker pole is left cleated in a fixed position with no attendance or trimming of the brace, topping lift or kicker (foreguy to some). It stands to reason that every time there is a significant alteration to the spinnaker sheet trim, the brace and pole have to be trimmed as well. If a lot of spinnaker sheet is eased out the pole has to be brought aft or conversely if the spinnaker is trimmed on a substantial amount the pole needs to be eased forward. So it is important to have someone always ready on the brace to be ready to react to the trimmers call. There is no point doing it retrospectively when the spinnaker has collapsed and the boat has slowed drastically. It is very important to trim the brace to the sheet; the sheet trimmer should be the best trimmer on the boat and call when the brace/pole needs to be adjusted. But beware: The sheet is the primary adjustment and all the subtle variations should be done through this. Constant over-adjustment of the brace can lead to the spinnaker being unsettled and inefficient as it moves around in front of the boat.

The alternative way of finding the right pole angle fore and aft is to look at where the spinnaker curls first when it luffs. If it curls on the leech up high then the pole is too far forward, and naturally if it curls low down the pole is too far aft. The curl should sit on the shoulder of the sail about two-thirds of the way up the sail. Work on this to keep the spinnaker pole at the optimum angle. It will make a huge difference to your boatspeed and VMG to the mark. 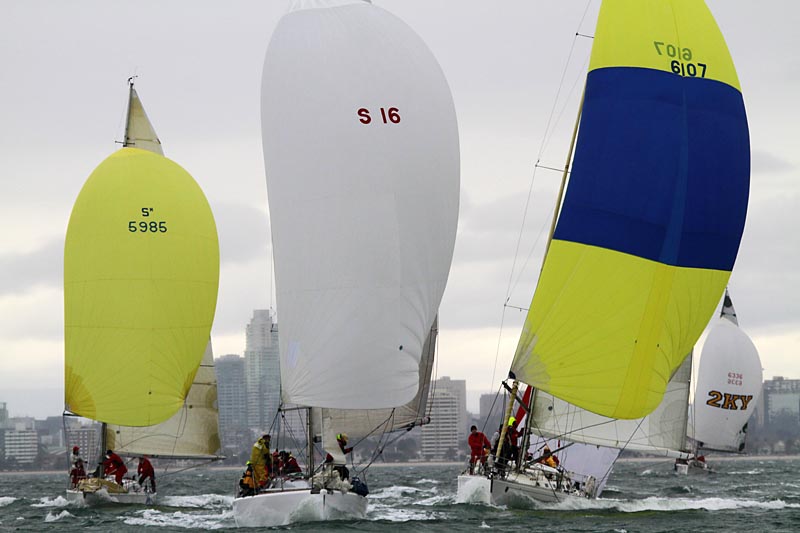 The other factor in pole adjustment is the height vertically. When running it is best to keep the pole quite high as this will spread the spinnaker and give maximum projected area. If the spinnaker becomes unstable in the head then you probably have the pole too high. It is hard to gauge on the boat what the best height is, but if the spinnaker becomes fluttery or develops that classic “elephants bum” look with a big crease(s) down the middle then lower your pole down until they disappear. Looking at spinnakers off the boat, I like to see the head angle exiting the mast at about 80-90 degrees depending on various profiles. This gives the maximum projected area and gets the spinnaker away from the blanket effect of the mainsail. Keep your pole parallel with the water if you have the adjustment on your mast. The heel or butt of the pole should go up and down with the outboard end to project the spinnaker away from the mast and mainsail.

As the breeze gets lighter it is harder for the spinnaker to fly without sufficient weight of breeze. The lighter loads means the spinnaker will begin to droop as gravity takes over. In this case we need to do several things. We need to lower the pole to enable the spinnaker to fly easier with a shallower profile. We also need to angle the boat up higher to get the wind flowing more across the boat and raise the apparent wind in our sails.

In heavier breezes we need to strap the spinnaker down a bit more. We don’t want it drifting around and making it hard for the helmsman. The biggest issue is the clew of the sail lifting under the increased load. This causes the head of the spinnaker to roll to weather and can trigger the infamous “death rolls”. To counteract this we need to stabilise the spinnaker clew by sheeting it forward and down. Most spinnaker sheets should have a tweaker system in place to enable this. On some boats with a brace/sheet combination you can sheet off the brace position which will suffice. It is also good to ease the pole forward and steer up a bit to stabilise your course. I like to see the centre seam of the spinnaker in line with the forestay and steer the course that suits this. That means we have a stable spinnaker with equal area either side of the boat and are sailing a slightly higher course, minimising the danger of a nasty reverse gybe. 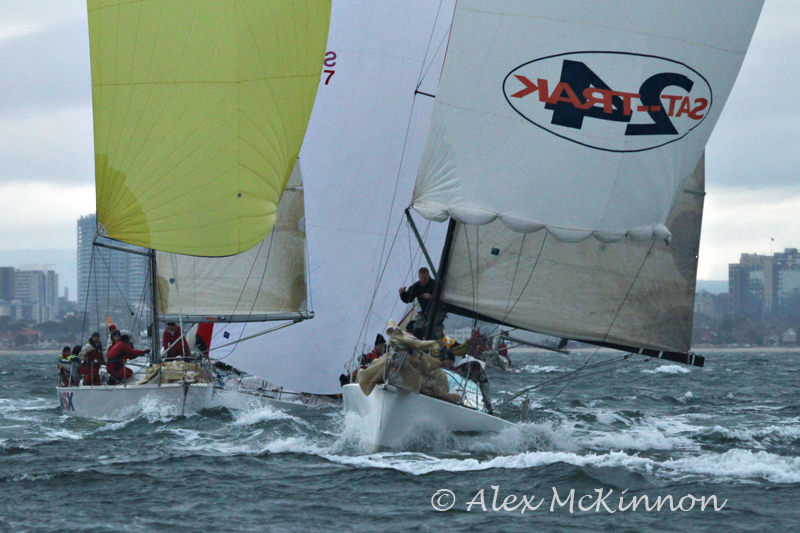 Toecutter 2 (with the reefed Bag) and INSX (yellow Bag) during Race One of the 2011 MWS. Pic courtesy of and © to Alex McKinnon.

Reaching with a symmetric spinnaker is never easy. Sail with your pole end on the tack significantly lower than the clew of the sail. This will unload the trailing edge of the sail and make it more headsail-like and efficient. It will make the boat much easier to steer and sail. As the wind gets up the sheer power of the extra sail area can overpower the boat quickly. Make sure you never over-sheet the spinnaker; try to err on the side of just keeping the curl right on the edge. Try and sneak your spinnaker pole aft a little even when close reaching as this can help unload the helm a lot and make the whole boat easier to sail. It also saves damage to your pole/ forestay and headfoil. If it is not viable, just get rid of the spinnaker. Remember the loss made by multiple roundups is rarely overcome by sailing slightly faster with a spinnaker up.

While we need to pay a lot of attention to setting the pole properly and using it to help us sail around the course faster, there are times where it is a huge advantage to sail with no pole. This has become very prevalent in match racing where the tactical options can change so quickly. Practise setting, sailing with and dousing your spinnaker without a pole. It can have so many advantages in positioning your boat at the top and bottom marks. A quick gybe or last minute jib hoist can be so much easier without having to deal with the mechanics of the spinnaker pole.

So next time you are out sailing, think about your spinnaker pole trim. Is it right? Can you improve it? Is the sail at its most efficient? The difference can be literally poles apart. 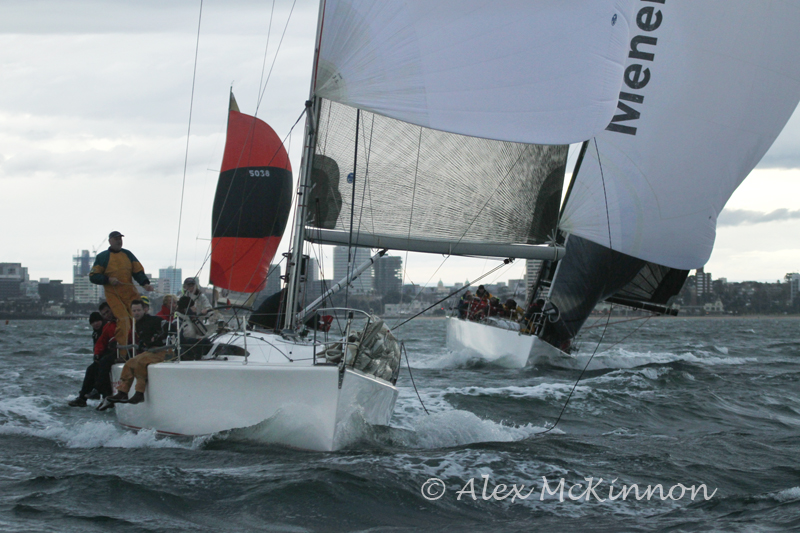 Chutzpah and Ninety Seven with very shy poles. Cinquante in behind them. Pic courtesy of and © to Alex McKinnon.

Many thanks to Tony for preparing this material for us...