and 2013 Melbourne to Osaka Race

From different libraries and different shelves they came, but what a pedigree they brought together. Double handed racing to places like Hobart, Osaka and Vanuatu, along with countless cruising and delivery miles, amount to an absolute treasure trove of experience, tales, anecdotes and stories, too.

The Bookends comprise of two halves of two very famous and very experienced double handed racing teams. Robyn Brooke from By Order Of The Secretary (BOOTS)/The Secretary and Rosie Colahan from Ingénue. For the 2011 Melbourne Double Handed, they "borrowed" George Shaw's, The Secretary, to go and have some fun whilst the other two halves of their crews, George and David James, respectively, leant a hand to entertaining the Japanese delegation from Osaka Hokko Yacht Club, who were in town for a formal visit. 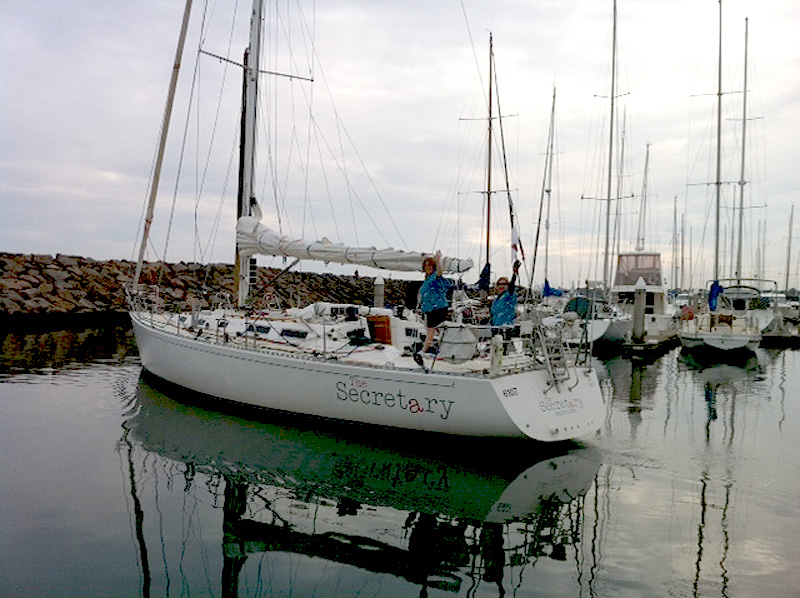 George Shaw waved off the girls (and got the iPhone out for this snap), as they departed with his boat... "I was helping with the Japanese visitors On Sunday, so Robyn and Rosie (whom I'm calling the bookends) took out Da Sec for the 2011 Melbourne Double Handed race. The Hokko visitors are still here and we've been with them and Melbourne City Council on Monday. The spit roast in the afternoon had us all very inspired", said Geo.

Seems like the bookends had a great time. Robyn, who has kept us so informed during their recent adventures, in between cooking, navigating, steering, being the radio relay vessel and attending to Geo who had broken ribs, said this of the short course. "To be honest I didn't see much - head down, tail up all day, but we had a great time and it was lovely weather."  Ever aware of an opportunity for a smile, Rob said that "...maybe we should have called the boat 'Tough Titties' for the day. I do recall being drowned in spinnaker at one stage, however. We had all three spinnakers up at different times and when I finally surfaced from under all that nylon, I found Rosie grinning about our mark rounding. 'A great windward drop Rob and I didn't give them an inch to get inside us and the mark! Unfortunately the light flyers got away from us during the lull. It would have been good to have one more triangle, as the wind came in just after we finished, helping the smaller boats home."

"It was a good first time out for the two of us. There's lots to improve on, but we enjoyed the day and we had our shark hats and Hawaiian shirts on. Just forgot the palm tree to hang off the stern", said Robyn.

Robyn's cohort, the bubbly Rosie Colahan was in complete agreement. "We had a great day on Sunday. As our first double hander together, it was a blast! George and Robyn are usually our rivals when racing double handed in the ocean, so it was great fun to team up with Robyn aboard The Secretary, while George and David lunched with the Japanese."

"The Secretary is a somewhat larger and more complex beast than Ingénue, with a rather long runway from front to back. At 12 tonnes, we were definitely in the 'heavyweight' class on the day which was challenging in the very light and variable conditions. Our most closely matched competitor was probably the Sayer 44, Slice of Heaven, with whom we had a good battle in the first few legs of the race, but then cleared out from them and then they retired. Coming from Ingénue to The Secretary is a giant leap up There is a plethora of winches, of every imaginable size, scattered around the boat from the mast to the cockpit, which after Ingenue’s four standard winches, is amazing and we had most of them working a lot of the time, with the flying of the symmetrical and asymm kites and also a brief run with the code zero/ drifter. We were constantly busy all day."

"The good news is that we did not break anything, we did not hit anyone and we were doing perfect gybes with the assy by the end of the day!!!! We went through the shortened finish line, executed a perfect gybe and then took off in the direction of R2 at our best speed of the day. The wind had finally settled in, but the race was over", said Rosie. "Thank you to George for generously allowing the girls to race unsupervised on his boat!"

So then, to put a bookend at the bottom of this story, we have some pics of the delegation from the Japanese host of the 2013 Melbourne to Osaka race - Osaka Hokko Yacht Club. Many thanks to Alex McKinnon for getting these to us. 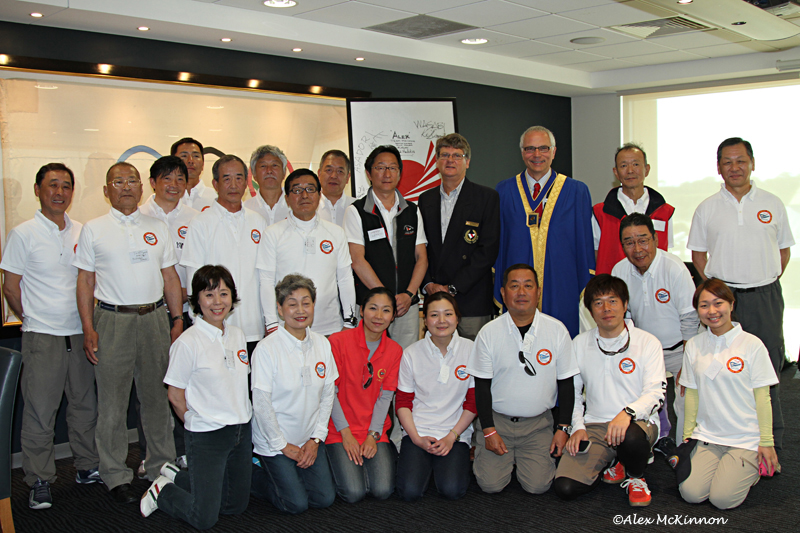 The full OHYC delegation headed by Vice Commodore Tsutomu Kondo, who is standing next to SYC Commodore Steve Richards and Bayside City Council Mayor, Councillor Alex Del Porto. During formalities, tribute also paid to the nation of Japan, after her losses at the hands of the recent earthquakes and resultant issues. 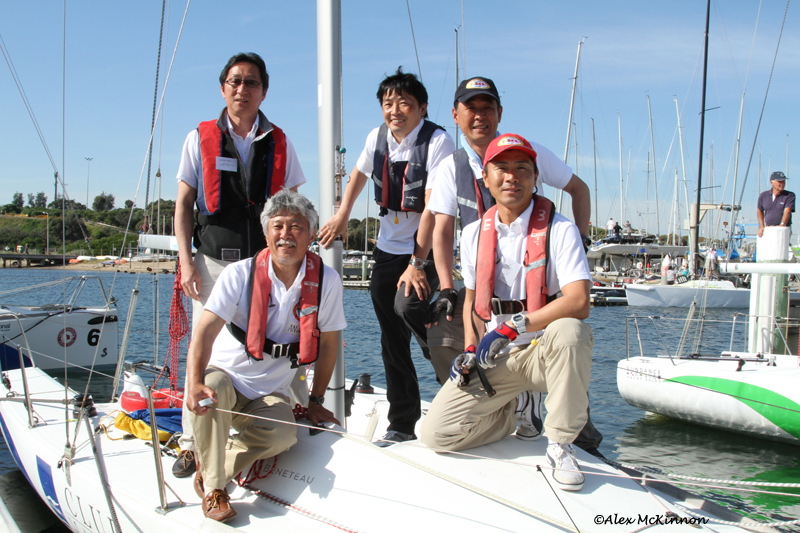 Keen and ready to roll. 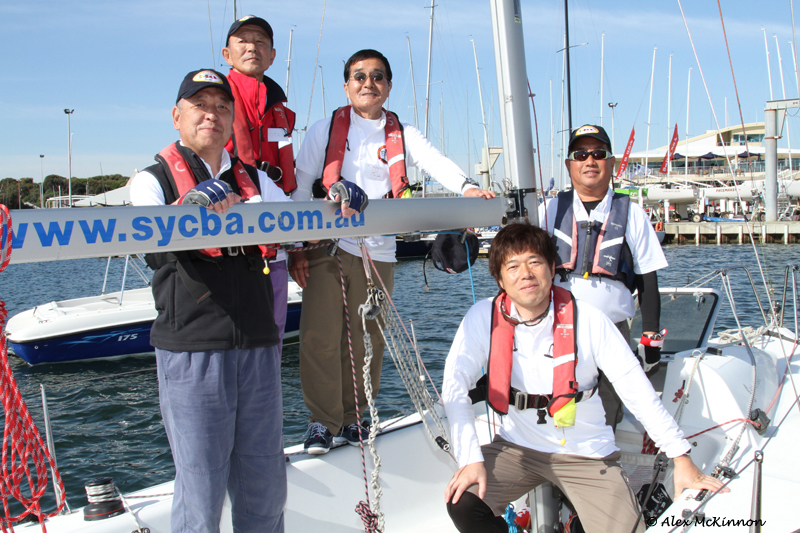 This crew obviously had winning on their minds... 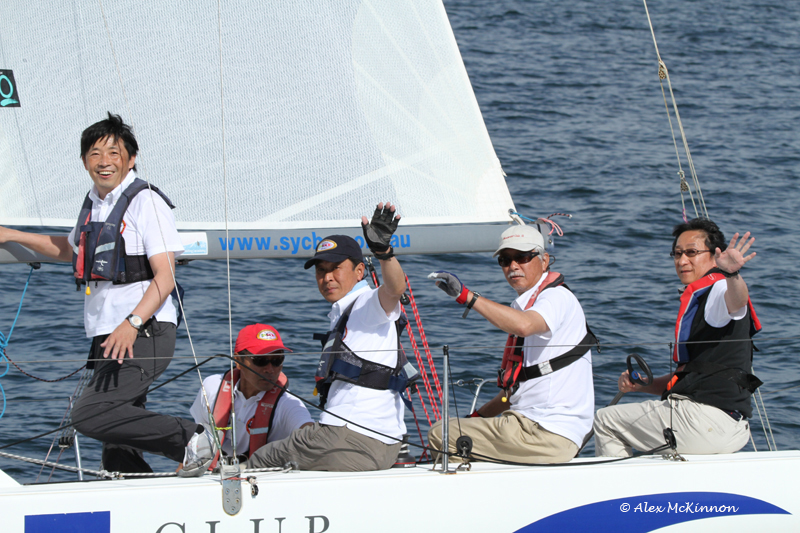 Yep. I'd say they had a good time. 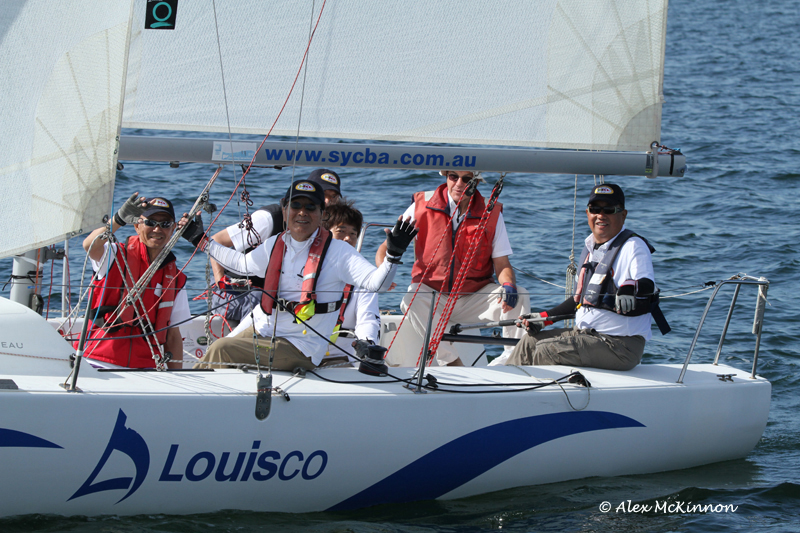 Suspended from a cherrypicker after the SYC Centennary Regatta on the Saturday, Alex grabbed this shot of all the gang present on the Northern side of the deck at the Taj.

Well done to all.

Go HERE to register your interest in the sensational 2013 M2O race.

Go HERE to see who has already expressed their desire to participate in the 2013 M2O.

Yes. We'll find something to wax on about....

Team and Winner of the Double Handed Race

Team and Winners from Double Handed Race Affirmative Action, the overall winner on the Double Handed race today and the Nameless Team comprising...